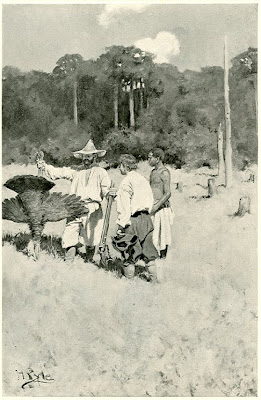 As it’s still Thanksgiving weekend, I figured I would post yet another Howard Pyle illustration featuring a turkey (be warned: there are more to come - but maybe next year). This one has rarely (or never) been reproduced outside its original context, namely Pyle’s Jack Ballister's Fortunes. “He picked up the bird and held it out at arm's length” first appeared in St. Nicholas for October 1894 and then a year later in the book version of the novel, published by The Century Company. In the magazine it measured 7.6 x 5 inches. Pyle painted the original in black and white oil on a piece of academy board of about 15.5 or 16 x 10 inches. I particularly like how he captured the effect of the glaring midday sun on the southern Virginia landscape.
Posted by Ian Schoenherr at 4:07 PM