I like to identify real-life objects or settings that Howard Pyle incorporated into his pictures: the boots that show up again and again in over 20 years’ worth of work (and that also appear in Andrew Wyeth’s “Trodden Weed”) or the strong box he bought in Jamaica that decorates some of his pirate paintings. As for settings, here’s an example...

In 1898, Pyle created a Summer School of Illustration (under the auspices of the Drexel Institute) in Chadd’s Ford, Pennsylvania. The Pyles set up house at Lafayette Hall, an old mansion across the road from Turner’s Mill, where Pyle and his 15 students had their studios. The male students boarded at Washington’s Headquarters, near the village, and, as Pyle said in a letter to E. L. Burlingame (now in the Archives of Charles Scribner’s Sons at Princeton University):


Close to me I have established the girls of the Class - nearly all of them living in a quaint little building which was Lafayette’s headquarters at the time of the Battle of Brandywine.... It is a beautiful little place perched upon the side of a hill, overlooking the stretch of valley to the airy hills beyond, and surrounded by old stone walls with a horse-block and with great buttonwood trees at the sides and sloping fields around.


Angel DeCora, one of the six female students, painted a view of the house, and below is a postcard which shows it a few years later. 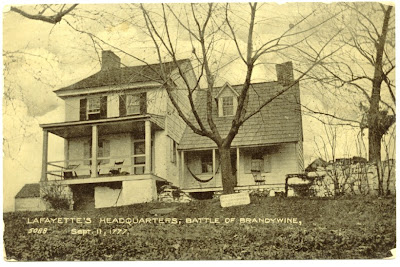 As usual, besides teaching that summer, Pyle had illustrations to make, including several for “Old Captain,” a story by Myles Hemenway for the December 1898 Harper’s Monthly. And, as you can see below, Pyle used Lafayette’s Headquarters in his frontispiece titled “And you shall not hinder me,” preserving much of the porch, but transforming the distant Pennsylvania woods and fields into a small harbor town in the south of England. 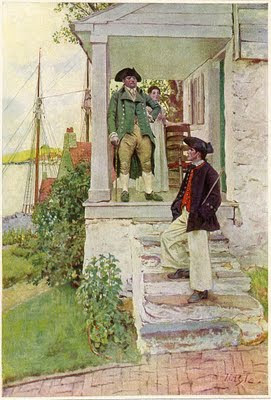 Boy, I've learned my lesson. I thought I was the truest bluest Pyle fan going. But you're schooling me big time!

Completely loving it, though!

Hi - I came across your blog while readingANdrew Wyeth, A secret Life and googling the locations mentioned.
It seems as though the building (Turner’s Mill) they used as a classroom is now the Chadd's Ford Township Offices. https://chaddsfordpa.gov/index.asp?SEC=DE4C54EE-15CE-4E11-B223-7E766F5BE206&Type=B_BASIC

If you go to that page, they explain that Painter's Folly is where Pyle lived when he was there, that the students often dormed in Lafayette's headquarters and Washington's Headquarters (which is part of the Brandywine Battle Field Historical Site).

Thanks for your information. I hope I was helpful as well.
Susan