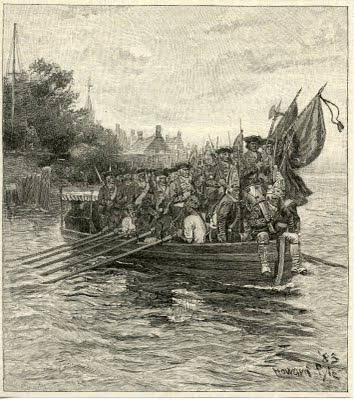 In honor of the now-neglected Evacuation Day, which celebrated the departure of British troops from New York after the Revolutionary War, here is “The Last Boat-Load of the British Leaving New York” by Howard Pyle, an illustration for Henry P. Johnson’s article “Evacuation of New York By the British, 1783” in Harper’s New Monthly Magazine for November 1883. The engraver has yet to be identified, but the dimensions of the cut are 4.7 x 5.2 inches.
Posted by Ian Schoenherr at 9:44 AM