In tweaking my last post (which I reserve the right to do, now and then), I found that the Green Bay and De Pere Antiquarian Society had posted photos of the Pyle paintings it recently acquired from the Brown County Library. The photos aren’t the best quality, but it’s good to see them nevertheless. Bear in mind that the photos were taken with black and white film and, although painted in black and white oil, the originals are much warmer and more “colorful” than they appear here.

And - just so folks won’t feel misled by the title of this post - Howard Pyle did, in fact, visit Green Bay: he arrived there at noon on Saturday, November 4, 1905, and spoke at the Elks Club that evening (it was supposed to be a slide lecture, but there were last minute technical problems, so he was forced to speak without backup). He spent the night with Mr. and Mrs. George Ellis at their home at 905 South Monroe Avenue (pictured below) and left town on Sunday. 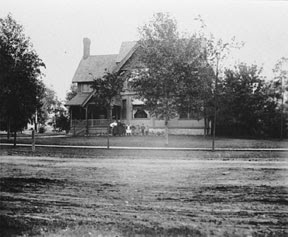 Posted by Ian Schoenherr at 9:08 AM

Email ThisBlogThis!Share to TwitterShare to FacebookShare to Pinterest
Labels: 1905, Colonies and Nation, Travels of the Soul, Woodrow Wilson