A while back, James Gurney posted some of Howard Pyle’s sketches for “Kidd on the Deck of the ‘Adventure Galley,’” drawn (by my calculations) between mid-August and mid-September 1902. As James aptly described them, “They have the flavor of a vision snatched from the ether, a snapshot from the swirling creative vortex, a half-remembered dream.” And while they are typical of the sketches I’ve seen, Pyle didn’t necessarily jump from these shorthand jottings to the final work, but would - at least occasionally and surely for his more ambitious works - do more careful drawings in between.

Here, for instance, is a pencil study - made only a few months before the Kidd sketches - for his painting “In the Meadows of Youth” which formed part of “The Travels of the Soul” published in The Century Magazine for Christmas 1902. As you can see, Pyle meticulously rendered the model’s blouse, but loosened up considerably in the final work. The figure in the drawing, by the way, is about 11 inches high and the figure in the painting is about 16 inches high (the painting itself is about 31.5 x 17.5 inches). 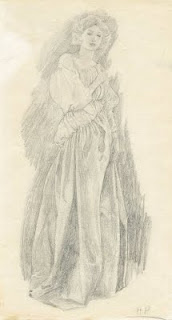 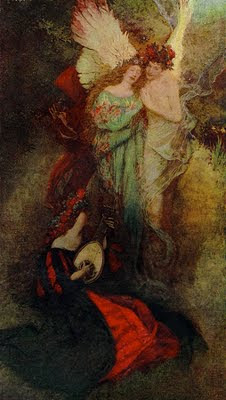 Note, too, that although this scan of the original plate is pretty poor by today’s standards, Pyle was thrilled when he saw the proofs and wrote to the publisher, “I wish to express to you my great and sincere admiration for the way in which you have reproduced my pictures of the ‘Travels of the Soul.’ I had never hoped to have such really great results, and it seems to me, apart from any question of artistic excellence, that the technical rendition of the work must certainly make a notable impression upon the magazine world. I do not see how it can be otherwise, for it appears to me that if you print the Magazine at all like the proofs, you will have reached the high-water mark of color reproduction.”

In 1903, Alonzo Weston Kimball purchased the original painting and its three companions and presented them to the Kellogg Public Library (now the Brown County Library) in Green Bay, Wisconsin, but they (and 18 of Pyle’s paintings for “Colonies and Nation” by Woodrow Wilson) were recently acquired by the Green Bay and De Pere Antiquarian Society.

Posted by Ian Schoenherr at 9:19 AM

Email ThisBlogThis!Share to TwitterShare to FacebookShare to Pinterest
Labels: 1902, allegorical, sketches, The Century Magazine, Travels of the Soul

thanks for this blog Ian. I am a huge Pyle fan, and will be coming back on a regular basis!

Yes, thank you for this Ian!

As an illustrator, to not learn about Pyle would be like a writer not learning to read. His teachings are so essential to what we do.

Will you go in to the later parts of his life? Particularly when he became an art director? I read he turned down John Sloan at one point and had shady dealings with some of his former students. Is there any merit in these allegations?

Yes, Pyle's art editorship at McClure's did strain his ties with a few of his students, particularly N. C. Wyeth, Frank Schoonover, and Allen True. And while I wouldn't necessarily describe his dealings as shady, he naively believed, going into the job, that he could depend on (or exploit) the loyalty of his students (and friends, like A. B. Frost) to help him carry out his big plans, but he soon found out that they had other professional obligations or they were more independent than he realized. On top of that, the magazine as a whole was in constant turmoil during his brief tenure, culminating in a large scale revolt and exodus of key members of the staff.

Temperamentally, Pyle was much better suited to be a sort of freelance art director - something he'd been doing with great success for the 10 years prior to his joining McClure's. It's really too bad he couldn't just content himself with the wonderful cottage industry he had going in Wilmington, but at this time (1904-1906) he had much loftier goals for spreading his art philosophy. "Ah, but a man's reach should exceed his grasp, or what's a Heaven for?"

the poem brings the pictures to life