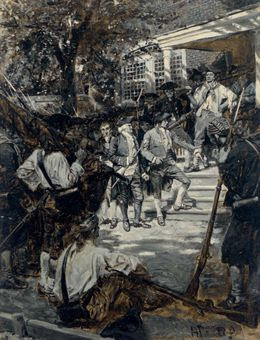 Although it’s always bittersweet when an original Howard Pyle comes up for sale (due to my pathological desire to possess anything he created coupled with my financial inability to do so), at least I get to see an often long-lost work in person, or, short of that, I get to see a high-resolution scan or photograph. The Men of Iron piece is a case in point as Heritage Auctions posted great shots of it (and five others) on their site when part of Charles Martignette’s collection was sold last July.

And here’s a link to another example that Christie’s auctioned in September. It is “Shays’s Mob in Possession of a Court-House,” painted by Howard Pyle (probably in the summer or early fall of 1883) for Thomas Wentworth Higginson’s “The Birth of a Nation” in Harper’s Monthly for January 1884.

Until it came on the market, this 8.5 x 14" oil on canvas had only been seen (except, I assume, by the owners’ inner circles) reduced to 4.8 x 6.4" and as the wood-engraver Arthur Hayman had re-interpreted it. But now we can inspect it pretty closely and see it as it looked when it left Pyle’s studio 126 years ago.
Posted by Ian Schoenherr at 10:14 AM