“A Study” in charcoal with white highlights on paper (19 x 31.5") by Howard Pyle was exhibited at the Second Exhibition of the Los Angeles Architectural Club, January 12-25, 1911. It was loaned by Scott Quintin of Los Angeles and a reproduction of it appeared in the catalogue. So far so good. But when did Pyle make it? 1900? 1910? Sometime in between? And how did Quintin get it? I just don't know.

In 1911, however, Scott Quintin (1884-1963) was an architect and from about 1907 on Howard Pyle grew more and more anxious to obtain mural commissions from architects. So did Pyle send it to the exhibition (via Quintin) as a way to drum up interest in his work? Or did he give it or sell it to Quintin, who exhibited it without Pyle's knowledge?

On the other hand, according to Who’s Who in the Pacific Southwest (Los Angeles: Times-Mirror Printing & Binding House, 1913), Scott Quintin studied free-hand and architectural drawing at the Drexel Institute between 1897 and 1904. So was “A Study” something a teenaged Quintin acquired during his Drexel days? Was it something Pyle drew in front of his class as part of a demonstration and then, say, left behind, only to be secreted home by Quintin (who, as far as I know, was not a Pyle student)? Or did Pyle simply give it to Quintin sometime between 1897 and 1900?

Well, at least we do know that the cavalier in “A Study” is wearing the same boots which turn up in dozens of Pyle’s pictures - the same boots which were “inherited” by his student Stanley Arthurs, then purchased by Betsy James Wyeth, then presented to her husband at Christmas 1950, then worn by Andrew Wyeth as he took recuperative rambles over the fields around Chadds Ford, and then featured by him (sans buckles) in his 1951 “self-portrait” called “Trodden Weed.”

I want those boots! 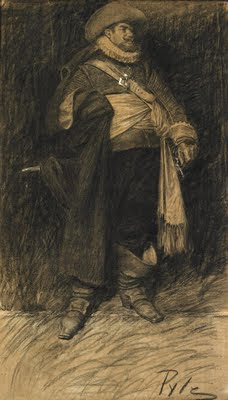 God, what a beautiful drawing... Dripping with character, free technically, fantastic integrity and values, great gesture... just extraordinary. And I love that buckle in white. And of course the boots. The whole thing is just so full of heart.

What you've been showing really serves to remind just how phenomenally great Pyle was. I must have looked at the Pirate and Mermaid classics held by DAM ten thousand times... They still amaze me, but they no longer have that hypnotic spellbinding quality (Unless I flip them in photoshop or the mirror) that accompanied my first 9,999 views.

Then when you see new stuff by Pyle, and that original breathless feeling returns, you have your perspective restored. Thanks for that.

Another thing I'm getting is just how innovative he was; Many graphic inventions I find so enjoyable in his pupils and grand-pupils, and that I thought were original to them, I now see had their antecedent in their master's towering imagination. In the last couple of posts I've seen conventions I usually associate with Dunn, Wyeth, Parrish, Everett, and some of his women students. As well as Rockwell, as you said.

Basically I'm just babbling on the internet about Pyle. Carry on.

I know what you mean about having your senses dulled by always seeing the same - albeit great - pictures. I only hope I can keep featuring things that are new(ish) or unusual enough to keep them sharp!

And you're right about how innovative he was - I think a lot of his students picked a style or an approach and stuck with it, but Pyle, either out of personality or necessity, was constantly experimenting and changing.