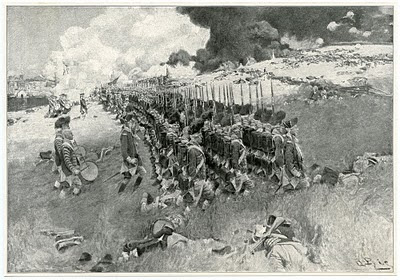 
…I send you today the Bunker Hill picture. It is quite carefully studied, and I think, excepting the portraiture which of course has to be idealized, it is a correct view of the battle.…

It’s worth noting that this description formed the basis of the caption for “The Battle of Bunker Hill” when it was printed in Scribner’s Magazine for February 1898, illustrating the second installment of Henry Cabot Lodge’s The Story of the Revolution:


The scene represents the second attack and is taken from the right wing of the Fifty-second Regiment, with a company of grenadiers in the foreground. The left wing of the regiment, under command of the major, has halted, and is firing a volley; the right wing is just marching past to take its position for firing. The ship-of-war firing from the middle distance is the Lively; in the remoter distance is the smoke from the battery on Copp’s Hill. The black smoke to the right is from the burning houses of Charlestown.


According to some notes taken during a 1949 conversation between Frank Schoonover and Gertrude Brincklé:


When Mr. Pyle was collecting information and ideas for this painting he wrote to the Admiralty office in London for details about the real formation in the battle, but got very little information. He made the composition from what they told him, and from his own imagination. At first the drummers were marching on the right side, and then he put them in the rear where they are now.


The version seen here was also Pyle’s second try: he was unhappy after a week’s work on the first, so he slashed the canvas with a sword. And then he painted this one in four days.

Charles Scribner’s Sons was impressed enough with Pyle’s “Battle of Bunker Hill” and “Fight on Lexington Common” to consider reproducing them - and the other ten pictures he was contracted to do - in color and selling them by subscription. This never panned out. But the publisher did decide to send an exhibition of illustrations for The Story of the Revolution around the country while the history was being serialized - a canny promotional stunt.

Pyle balked. He told Joe Chapin on December 30, 1897, that “to exhibit my pictures in their present partially finished state would, in my opinion, be injurious to them and to me, and that I am accordingly compelled to lay aside my other work and to retouch them whether I choose to do so or not.” However, he conceded - under protest - in the same letter.

But Pyle wasn’t being entirely frank, and a few days later he confided to Charles Scribner II: “It may not be a probability, but at least it is a very strong possibility that this set of pictures, when completed, may be purchased by the Congressional Library Committee, to be hung in the Library Building in Washington.” Pyle was worried, though, that key government officials would see his “unfinished” works on display and deem them unworthy of so high-profile a home as the Library of Congress. He was also concerned that showing “The Battle of Bunker Hill” as is in Boston might jeopardize his chances for a commission to paint a mural on the same topic for the Massachusetts State House. He explained, “The picture was sent to you very hastily and in an unfinished state, because of the demand of the Magazine to have it in the Art Department by a certain given date. I was aware that it was crude in its effect and unfinished in all of its details - but had no idea that it was so crude in color as it proved to be when I saw it again and with fresh eyes.”

In the end, Pyle indeed tweaked “The Battle of Bunker Hill” somewhat: compare, for example, the clouds in the magazine plate (in black and white, above) and the original (in color, below). Ultimately, however, for all his hand-wringing and the efforts of his friends with influence, both the Washington and Boston schemes collapsed. 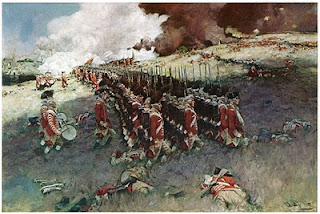 Posted by Ian Schoenherr at 5:29 PM

The last I heard about this painting (one my favorites by Pyle BTW) was that it was missing and probably stolen from the Deleware Art Museum's storage.

Do you have any word on if this is indeed the case?

I understand it hasn’t yet been found: the FBI still has it in their National Stolen Art File.

Warfare is a fascinating subject. Despite the dubious morality of using violence to achieve personal or political aims. It remains that conflict has been used to do just that throughout recorded history.

Your article is very well done, a good read.

What would this painting be worth

I bought two at a storage sell

Please tell me more - and it would be great to see some photos of what you have. Thanks!