The Return from Deerfield 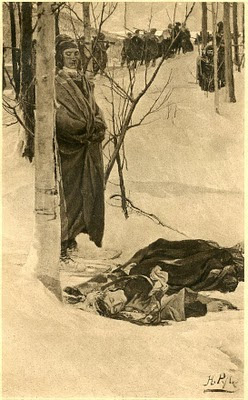 “The Return from Deerfield” by Howard Pyle, 1897

The town of Deerfield, Massachusetts, came up in conversation recently and it prompted me to exhume this picture from my files. Howard Pyle painted “The Return from Deerfield” for Volume I of A Half-Century of Conflict, included in France and England in North America, Part Sixth, which formed Volume XI of the The Works of Francis Parkman (Boston: Little, Brown and Company, 1897).

The original 14 x 24" oil (in part color) belongs to the University of Delaware. And here is a blurry photo of the same (swiped from UD’s website, with apologies) if only to give some idea of Pyle’s use of red in the cap, robe, kerchief, etc. and the “colder” overall feel of the piece, which is lost in the warm browns and yellows of the photogravure. 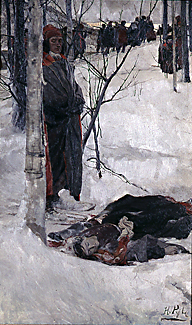 The calm demeanor of the standing figure always puzzled me: I guess because I was misreading the title as “The Return to Deerfield.” But in finally bothering to read the chapter Pyle illustrated, I now understand that it shows the French and Native American forces marching back to Canada after raiding the village and taking a number of villagers captive. The detail of the standing figure’s collar indicates that he is the cold-blooded Jean-Baptiste Hertel de Rouville, who commanded the attack in the winter of 1704. The woman at his snowshoed feet is Eunice, wife of the Reverend John Williams. As Parkman says:


The prisoners were the property of those who had taken them. Williams had two masters; one of the three who had seized him having been shot in the attack on the house of Stebbins. His principal owner was a surly fellow who would not let him speak to the other prisoners; but as he was presently chosen to guard the rear, the minister was left in the hands of his other master, who allowed him to walk beside his wife and help her on the way. Having borne a child a few weeks before, she was in no condition for such a march, and felt that her hour was near. Williams speaks of her in the strongest terms of affection. She made no complaint, and accepted her fate with resignation. “We discoursed,” he says, “of the happiness of those who had God for a father and friend, as also that it was our reasonable duty quietly to submit to His will.” Her thoughts were for her remaining children, whom she commended to her husband’s care. Their intercourse was short. The Indian who had gone to the rear of the train soon returned, separated them, ordered Williams to the front, “and so made me take a last farewell of my dear wife, the desire of my eyes and companion in many mercies and afflictions.” They came soon after to Green River, a stream then about knee-deep, and so swift that the water had not frozen. After wading it with difficulty, they climbed a snow-covered hill beyond. The minister, with strength almost spent, was permitted to rest a few moments at the top; and as the other prisoners passed by in turn, he questioned each for news of his wife. He was not left long in suspense. She had fallen from weakness in fording the stream, but gained her feet again, and, drenched in the icy current, struggled to the farther bank, when the savage who owned her, finding that she could not climb the hill, killed her with one stroke of his hatchet. Her body was left on the snow till a few of her townsmen, who had followed the trail, found it a day or two after, carried it back to Deerfield, and buried it in the churchyard.

Posted by Ian Schoenherr at 9:45 AM

Thank you, Ian, for this blog. Eunice Mather Williams is my 10x great grandmother.