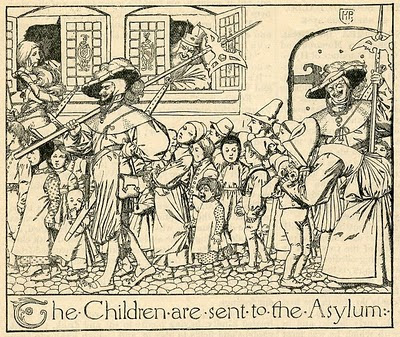 “The Children are sent to the Asylum.” I know how they feel. This lovely pen and ink (about 9 x 7.5") is typical post-Pepper-and-Salt-pre-Wonder-Clock Pyle. It made its one and only appearance in the November 3, 1885, issue of Harper's Young People, illustrating “The Book of Balbo” by Sherwood Ryse, the pseudonym of Alfred B. Starey, who was editor of the magazine at that time. After Starey died, Laurence Hutton (another Pyle friend) eulogized him in the pages of Harper’s Monthly (May 1894):


Harper’s Young People, although they did not know him, and perhaps never even heard his name, lost a good and faithful friend when Alfred B. Starey died last summer in New York. One who was long and intimately associated with him, in a professional as well as in a social way, can only say of him here, that he was as clean in morals as he was in intellect, that he won the respect and the confidence of all those with whom he was brought in contact, that no man of his years, or of his position, in his profession or out of it, was more sincerely liked or more deeply regretted, and that he never, in any society, said or did anything which his own sisters, or the Young People for whom he labored, might not have heard or seen.

The bound volume of the little magazine which he edited for seven years, and the first which has appeared since he passed away, is another and enduring stone in the monument which he helped to erect to himself. In Harper's Young People Mr. Starey put the very best of his life work. Although, of course, he did not die for it, he died in its service; and on every page, and in every line, it shows his critical instinct and his conscientious care.

Posted by Ian Schoenherr at 6:22 PM