Where Did Howard Pyle Die? 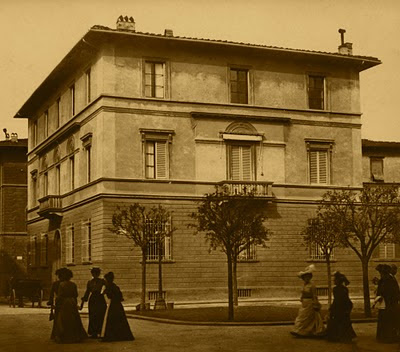 Unlike Howard Pyle’s place of birth, his place of death is not in dispute. It happened in the building shown here - 6 Via Garibaldi in Florence, Italy - at 4.30 a.m. on Thursday, November 9, 1911. A Pyle descendant has a copy of this photo, marked to show the precise location: the room with the lighter window (as opposed to the two darker windows) on the top floor.

On New Year’s Day of 1911, Pyle had described the family’s then new Florentine apartment to Stanley Arthurs and Frank Schoonover:


The rooms are very comfortable, and the house is one that was occupied by Lord Byron when he was here in Florence. We are in the third story of the house, which is not nearly so fashionable as the second, but it suits us admirably. The rooms all open out upon a passage-way, and the passage is reached by a flight of stone steps from the street which are really quite shut off from the apartments excepting for an entrance door with the locks and bolts of a prison.

Pyle’s daughter Phoebe felt a bit overwhelmed by the “tawdry magnificence” of the furnishings, but Pyle grew to enjoy the apartment in particular and the city in general. “It seems like home,” he wrote that September. “There is no turmoil there, and no upheaval, and if there is sickness there is a comfortable place to be.”

The two lower floors of the place were occupied for some years by another American, Dr. Charles Riggs Parke, who became, wrote Pyle, “one of the closest of my friends” and “my regular physician here in Florence.” But in a world without antibiotics, the doctor was no match for the Bright’s Disease (or uric acid poisoning?) which doomed his upstairs neighbor.
Posted by Ian Schoenherr at 2:24 PM

Wow! Incredible stuff here. I taught a course in Florence a few years back and during my time there tried to find where Pyle had been working, with no luck. How far outside of the city is his burial place?

His ashes are in a columbarium in the Cimitero degli Allori about two miles from the Arno on the Via Senese (the road to Galluzzo, Certosa, etc.).

Pyle’s studio was at 9 Piazza Donatello and his summer place was the Villa Torricella in San Domenico di Fiesole.

He also stayed at Pensione White at 2 Piazza Cavalleggieri for his first 10 days or so in Florence.

In Siena he stayed at the Pensione Chiusarelli.