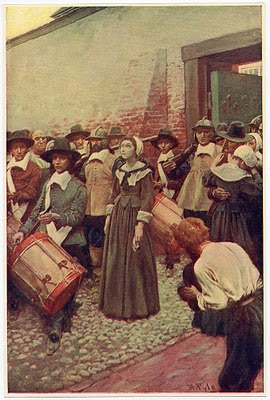 
Permit me to thank you for the beautiful illustrations with which you have ennobled - the word is just - my little story of Mary Dyer, in the November issue of McClure’s. I cannot but feel that if I had only seen the illustrations first, I should have written a better tale. I have to thank you, too, and most sincerely, for the kind suggestions with regard to one or two details in the story, that were incorrect. It was the more important that Mary Dyer should come out of the prison with her hands unbound - as you represented her - from the fact that in the scene on the scaffold, which is absolutely historical, she is spoken of as though, at first, her hands were free. Until you pointed it out, I had not noticed the inconsistency in my own narrative. Again let me offer you my most genuine thanks.

The painting King refers to, "At her appearing the multitude was hushed, awed by that air she wore" (5 x 7.4" in the magazine, 21.5 x 30.5" in the flesh), has also gone by the more prosaic “Mary Dyer Being Led to The Scaffold.” According to my notes, George L. Dyer purchased it and its two companion paintings (both about 16 x 24") directly from Pyle. On October 31, 1921, the two companion paintings were stolen from a private residence in East Orange, New Jersey, and never recovered. This one, though, now belongs to the Newport Historical Society in Rhode Island.
Posted by Ian Schoenherr at 3:44 PM