Howard Pyle and A Peculiar People 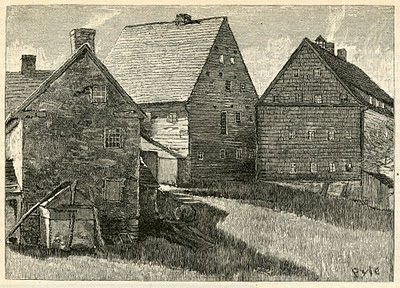 The following is part of a letter Howard Pyle, then in Ephrata, Pennsylvania, wrote to Anne Poole, his fiancée, on November 19, 1880:

Bur-r-r-ruh! but it was cold today. I managed to potter along tolerably well in the morning, sitting in the sun and sketching the old buildings of the Cloister. But when I undertook in the afternoon to go around and get another view, sitting in the shade, I had to resign. I worked along for some time with stiff fingers and chilled bones, but when I got to painting and the water I was using froze in little cakes all over the picture, I absolutely could not go on. I would have stuck at it in spite of chilled fingers if it had not been for that.

…I went in to warm my hands and the strict head sister took them into her own puffy palms in the most motherly way, saying with a surprised air “dey is golt,” just as if it were a land of Egypt out in the shadow of the woodshed. I thought it a good time to bone her again about having her picture taken, but she still firmly declined in Pennsylvania Dutch.…

As I could do no more at the buildings I went over to see my ancient friend Pfautz. I showed him the sketch I had made and he was interested. Then I asked him to sit for his picture. Here his daughter put in her word, objecting most strongly. I think the old man rather liked the idea. He had the queerest old trousers that might have been worn by Noah anterior to his cruise - yellow with age and patched with parti-colored remnants - oh! so picturesque! His daughter thought it would be ungodly to have his picture taken. I thought she meant ungodly for me to draw it. “I’ll take the responsibility,” I said. “You better be responsible for yourself,” said she, “one soul ought to be enough for you.” Then I quoted Scripture and she answered with twice as much. Then I appealed to the old man. “She will scoldt me,” said he, “and make it onpleasant.” To make a long story short I finally prevailed, provided I would not sketch more than his head.

This was not exactly what I wanted, but half a loaf is better than no bread, so I acceded to this stipulation.

The old man followed me out of the house when I was done. “Vas you going to publish that in Harper’s Weekly?” said he.

“Harper’s Monthly, if you will let me. I hope you won’t object.”

Again he hesitated. “You’ll put my name, won’t you?”

“I t’inks you petter - ain’t my name’s John B. Pfautz. John Bauer Pfautz - aigh? (with a rising inflection). And you might send me one of the papers - aigh?”… 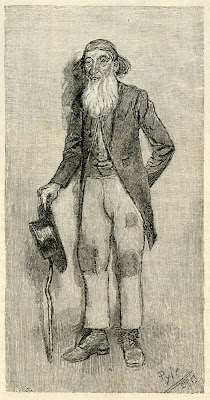 “My Cicerone” (portrait of John Bauer Pfautz) by Howard Pyle, 1880
Posted by Ian Schoenherr at 8:59 AM