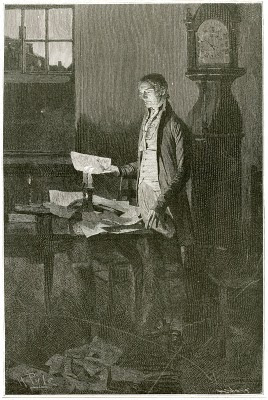 In the court of the [Drexel] Institute were displayed last week four historical paintings by Howard Pyle, of which “Jefferson Framing the Constitution” was one. They are all painted in the low tones Mr. Pyle invariably employs, and they are finished with the same conscientious thoroughness. Mr. Pyle is almost the only artist living who can finish a picture to the last detail and yet lose nothing of its artistic value. (The Philadelphia Inquirer, November 12, 1899)

Shown here is the engraving of the work as it appeared in Scribner’s Magazine for March 1898. So much for the “low tones.” But you can see what it should look like via the Rockwell Center for American Visual Studies. The original painting (about 24 x 36") is at the Delaware Art Museum.

The Philadelphia Inquirer wasn’t quite right about the title, especially since Jefferson didn’t frame the Constitution. It’s rightfully called “Thomas Jefferson Writing the Declaration of Independence” and illustrated “The Story of the Revolution” by Henry Cabot Lodge.

In order to capture the effect of candlelight - and still see what he was doing - Pyle placed his model in a tent set up in his studio. He most likely painted this in late November 1897.
Posted by Ian Schoenherr at 8:29 AM

Interesting. Either the engraver is making up some of the details that Pyle left to mystery (the right foot, for one), Pyle's picture has gotten somewhat darker, or the photo of the painting isn't doing the murky areas justice.

It's off topic, but I wonder, is there any record of Pyle having correspondence with Charles S. Pierce, or an interest in his works?

Well, Pyle’s media weren’t very archival, so this could easily have darkened over time - even in his lifetime Pyle had problems with fugitive pigments fading, darkening, chipping, etc. and sometimes had to retouch things after only a few years.

So far I haven't found any references to Peirce, but there were probably very few degrees of separation between them. Despite his self-described hermit-like existence, Pyle rubbed elbows with a lot of people.