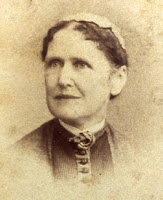 Margaret Churchman Painter Pyle, aged 57, died on November 2, 1885, at her home at 502 West 11th Street in Wilmington, Delaware. “Cancer of Stomach” was the cause of death, according to Dr. James A. Draper. This tribute appeared in Every Evening the next day:


The death of Mrs. Margaret C. Pyle will cause sincere and wide-spread grief and a social vacancy that cannot be filled. Years ago Mrs. Pyle became well-known for her literary ability and her able and helpful criticisms of Wilmington’s best amateur actors, and her parlors have year after year furnished the most enjoyable amateur dramatic entertainments in Wilmington. The culture of many of the best educated people in this city has been largely influenced by her work at the Friends’ Social Lyceum and similar literary gatherings, and by her most casual conversation. The loss sustained by the removal from our midst of an individuality like that of Mrs. Pyle cannot be estimated; it can only be felt.

Posted by Ian Schoenherr at 5:08 PM