Who (or Which) Shall Be Captain? 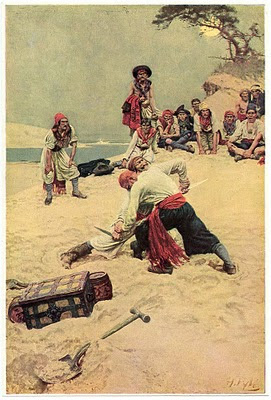 “I think that pirate duel is the most terrific thing I ever saw. I had almost all the sensations I have enjoyed at a prize fight. Oh if I were only a pluto I’d have that in the middle of my shack and when I wanted to be lifted out of the dreary run of existence I would take a look. As I grow older and colder I do not fail to remember that fighting - drinking and the women are after all the big primitive sensations - everything else is B. Flat.”

So said Frederic Remington in a letter to Howard Pyle, written on November 13, 1908. “Who Shall Be Captain?” was one of thirty Pyle works then on display at the Macbeth Gallery in New York City. Harper and Brothers had the right to reproduce it, but they didn’t exercise that right for a couple of years: the picture appeared, at last, in the January 1911 Harper’s Monthly along with a poem called “The Buccaneers” by Don C. Seitz - and with the title tweaked to read “Which Shall Be Captain?” It also went by the name “The Fight on the Sands” at the Harper offices, according to Pyle.

The Delaware Art Museum now owns the original 32 x 48" oil on canvas. And, incidentally, the treasure chest was painted “from life” and can be seen in photos of Pyle’s studio; he bought it on one of his trips to Jamaica and then Thornton Oakley bought it at Pyle’s estate sale in 1912 (and rumor has it that it’s now in the vicinity of Chadds Ford).

I’ve always been of two minds about this picture: while it’s nicely painted, the exaggerated expressions of the onlookers - the cartoon scowls and goofily popping eyes - don’t sit well with me, and I find the composition more static than dramatic. Then again, if I were only a pluto I’d have it in the middle of my shack, too.
Posted by Ian Schoenherr at 10:37 AM

I'm with Remington. One of my all time favorite Pyle pictures.

I find the composition utterly fascinating and filled with tension, rather than static. As an experiment, you might try flipping this horizontally in photoshop or preview to get a fresh perspective on it to see if it comes alive again for you.

And if a pack of stinkin' no-good pirates can't look like seedy, semi-comical scalliwags in the Damon Runyan tradition, what hope is there? I say, better the pirate looks Jack Elam or Steve Buscemi, than Errol Flynn or Matthew Modine. :)

But I still think it lacks the subtlety of some of his other characterizations. At this point, though, it was hit or miss with Pyle and often his portraiture slipped into caricature.