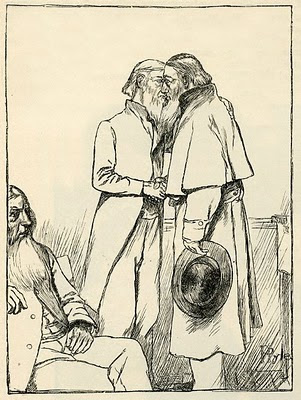 But Howard Pyle did eat a meal and write a letter here. Where? Why, the Mount Vernon House, run by Zephaniah Undercuffler in Ephrata, Pennsylvania - 130 years ago today. As he complained to his fiancée, Anne Poole, who was back home in Wilmington:


...You see where I am (Ephrata) - and the name spelled right thanks to being printed. But I am not going to stay here - oh no! I am going back to Lancaster tonight. And I am going to stay in Lancaster and am going to get one meal at least in Lancaster. The unpronounceable proprietor of this Mount Vernon House told me today that this was a Dutch house, kept in Dutch style, and that I must help myself accordingly, which I did, to fat pork, turnips, diminutive sweet potatoes, dried peaches, and an indescribable pie, but oh my! - never mind, I won’t say anything about my poor stomach just here.… I am going back to Lancaster tonight, as I said, for dear only knows what the German bed may be....

A day or so earlier, Pyle had arrived in the area to begin gathering data on the religious community of “Dunkers” for a Harper’s Monthly article. A few months later, Scribner’s Monthly (soon to be re-christened The Century) perhaps unwittingly dispatched two artists to Ephrata to illustrate a similar piece for that magazine. Joseph Pennell, one of the two artists, later recalled:


We went at the drawings with fury, but, to our horror, we found that Howard Pyle had been there, for he had left behind an unfinished drawing which was preserved in the hotel. We said nothing, but worked harder and faster, fearing that any month Pyle’s article might appear in Harper's and ours never be printed... and, though we trembled every month when Harper’s was announced, we came out in The Century years before he did in Harper’s.

Indeed, “A Colonial Monastery” by Oswald W. Seidensticker, illustrated by Pennell and Henry Rankin Poore, came out in December 1881. But Pyle’s “A Peculiar People” only appeared in October 1889.

Above is one of the pictures that Pyle didn’t leave behind (at the Mount Vernon House, I mean). And rightly so. It’s called “The Kiss of Peace” and again shows the sort of “transitional” drawing style that Pyle employed in the early 1880s and which I’ve pointed out here and here and here. It could almost pass as a drypoint.

Posted by Ian Schoenherr at 1:52 PM