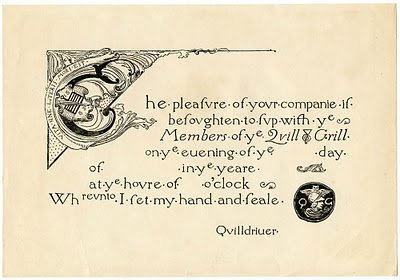 Howard Pyle belonged to many clubs and associations over the years: some well-known - like the Grolier, the Players, and the Century - and a few more obscure. For example, Pyle was a founding member of the Quill and Grill Club, formed on August 17, 1883, in Wilmington, Delaware. It was composed mostly of journalists and lawyers, including some of Pyle’s intimates, such as Alfred Leighton Howe (to whom Pyle dedicated Within the Capes), Lewis C. Vandegrift (dedicatee of The Rose of Paradise and later Pyle’s neighbor), and newspaperman Edward Noble Vallandigham (Pyle’s “esteemed friend of many years standing”).

Interestingly, another early member of the Quill and Grill was the legal scholar and future World Court Judge, John Bassett Moore, then in his early twenties. At an 1885 meeting of the club - held in Pyle’s studio - Moore read poem which was published in his Collected Papers (and once upon a time at the Library of Congress I managed to dig up and hold in my hand the original manuscript). That same year, Moore went to Washington to work under Secretary of State Thomas Francis Bayard (later Pyle’s friend and landlord).

Pyle created the invitation shown here in 1883 or, perhaps, 1884, judging from the style of the lettering and decorations.

At a meeting held on November 8, 1883, attorney Joseph A. Richardson read a poem (dedicated to Miss Elizabeth Shipley Bringhurst, later Mrs. John Galt Smith) entitled “The Evolution and Development of Q. and G.,” in which the club’s founders are humorously described, including this stanza on Howard Pyle:


One by nature has been gifted
With the power of creating
Shapes of most surpassing beauty
From musty tomes of ancient legend.
At his touch sprang into being
Sweet Elaine, Shalott’s fair lady,
Robin Hood, and all his fellows.
His cunning hand that raises
Forms of brave Colonial heroes
Damsels prim in olden costumes,
Cavaliers and burly Roundheads
Till they seem to breathe before us.

Trips off the tongue, no? But we should be grateful to have a relic such as this, which sheds light on how a young Howard Pyle was perceived by his friends.
Posted by Ian Schoenherr at 2:40 PM